Writing out my house power/battery situation and my different options. Pile in with opinions as you like

So, when received in March 2020, the battery seemed solid and the solar panel was pushing about 2 solar amps into the system on a good day (best I ever saw was 2.5 solar amps; its a fairly old panel and its small). 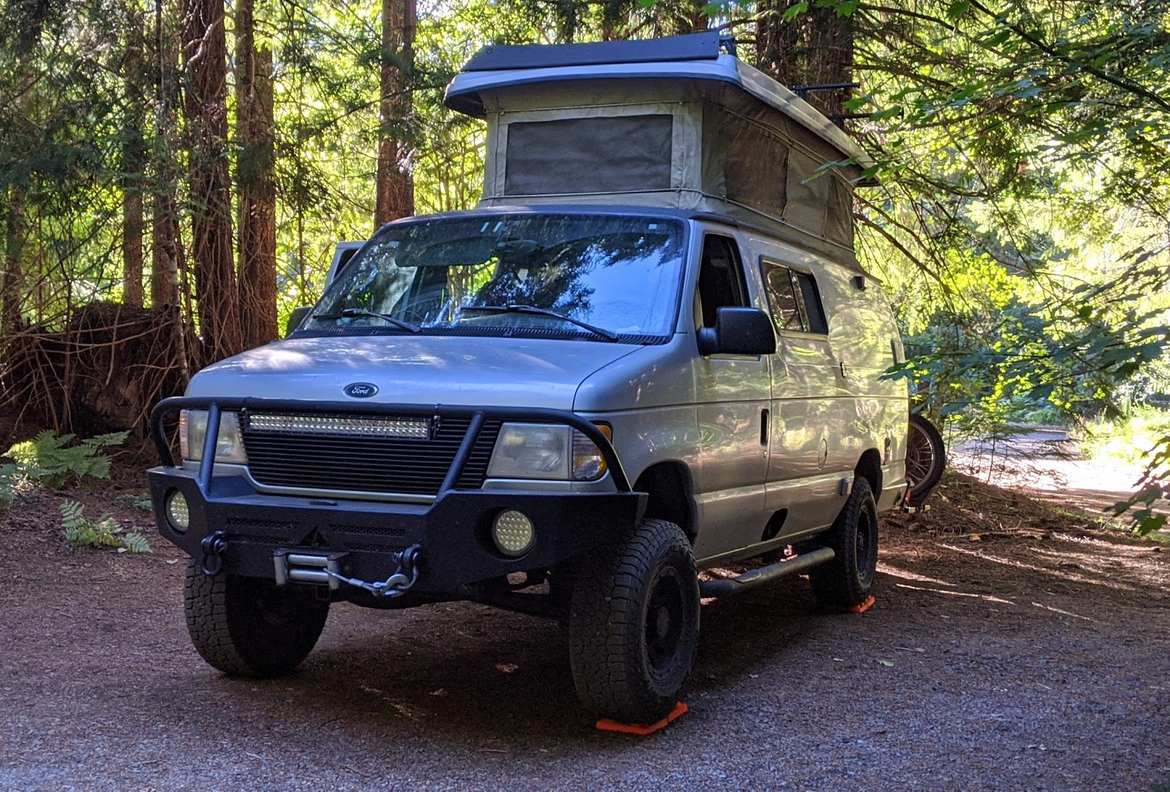 However, now I suspect at possibly three issues at play:

On our first small trips, we weren’t consciously managing power or thinking too hard about how much driving we were doing. Between the solar panel, driving, and messing around with the generator, we weren’t really paying attention to battery levels. I have memories of the Kyocera and the RC6 reading the battery voltage as high as 13 or 13.5ish but I can’t recall whether we were running the engine or generator at the time (which would then we telling us about the voltage output of the engine/gen-set, not the battery) We have just returned from a longer trip (4 weeks roughly), and this is where these issues started to bubble up.

For one thing, we went backpacking for four days and three nights in the middle Sierras (at the very start of the trip). I wanted to test whether the battery would last that long, keeping the fridge on. The idea of a reheated curry at the trailhead was certainly enticing! Unfortunately, it didn’t last and we lost the curry. :( But after that, I started to notice some of these issues with the house battery. I was working under the assumption that the inverter would protect the house battery from load when it got too low (as described in the owner manual) but perhaps that was incorrect. 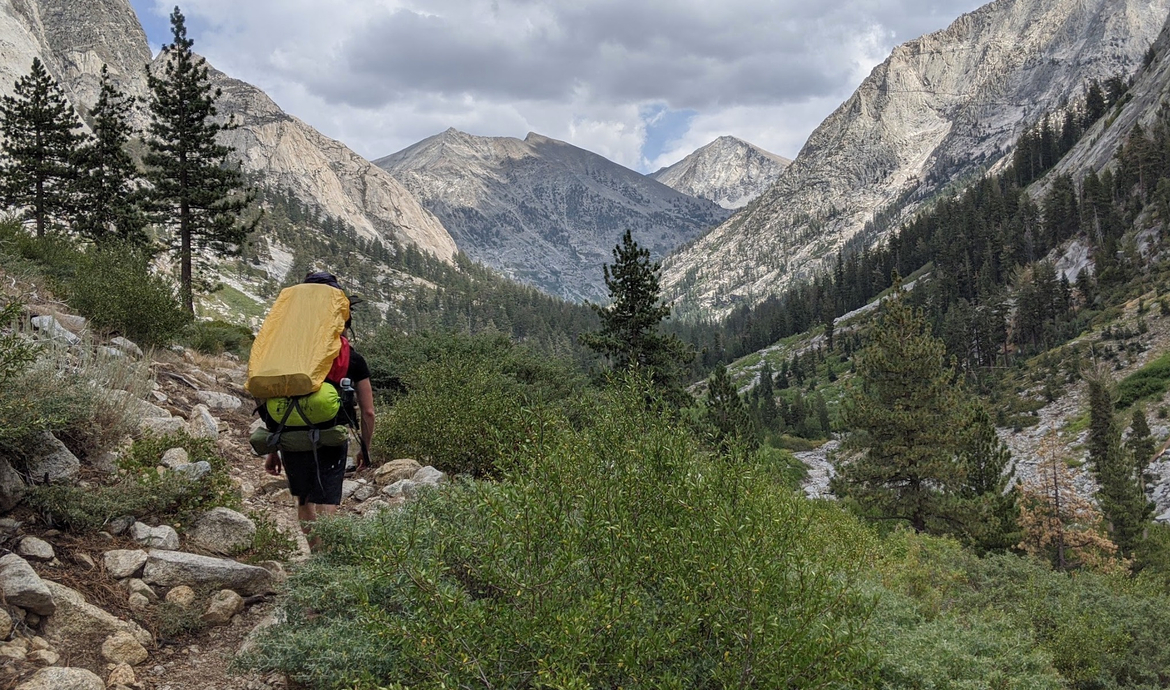 Discovering that something was up

After the backpacking, we drove 6 hours home and after a few days at home (getting our motorcycle carrier setup), we also drove another 4 hours.

In the second week of the trip, we parked the van near Mt Shasta for several days and I noticed: 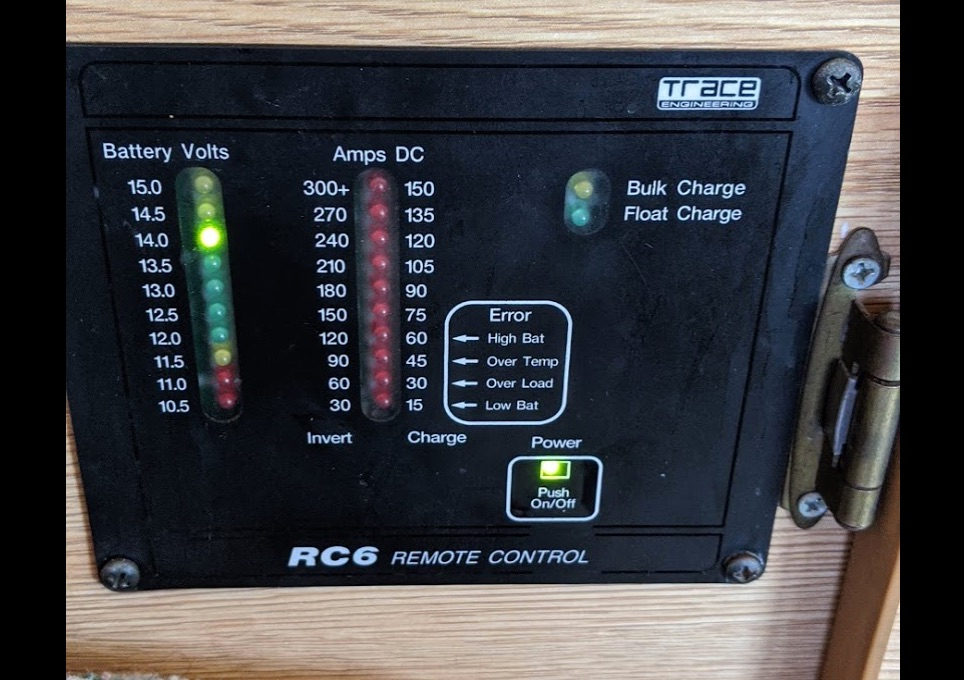 Trace RC6 unit while the engine is running

We got smoked out of Shasta and headed for the Oregon coast (This was mainly a PNW trip). As we bumped up towards North Washington, we had several days with different hours of driving, and I started taking notes about what voltage was coming out of the battery

After a longer day of driving (the 23rd), the battery voltage seemed to top out at 12 volts. The next morning (24th), the fridge had dropped it to 9.3. We drove less than 2 hours on the 24th, and the next morning (25th), we only had 7.9 volts and the fridge wasn’t running. On the 26th we drove over four hours, getting the battery to 12 volts at the end of the day and it fell to 7.3 by the next morning (on this morning the RC6 was also flashing strangely… I assume an error code that isn’t listed in the owners manual)

After this, we arrived at a relative’s house in Washington, cleared out the fridge and turned it off for a week, with a bunch of driving.

In the last week back, we drove more per day, so avoided the fridge conking out. At this point, we were dodging the wildfires in Oregon that were coming up everywhere, and making tracks home to Northern California. The voltage at the end of all that driving (including over 9 hours on the last day) got up to 12.2 volts.

Side view of van at our fav boondock of the trip

So, there is a mix of a few different issues here and I need to figure out how to resolve them. Some options:

No change to the power setup here; just fixing or replacing stuff. Either way, I would need to figure out how to access the battery. Considering its bulk and position, I would need a hand (or a flat jack) and also I haven’t figured out how to remove the battery from its carry cage under the van. Any links to youtube videos of someone doing that?

A friend in Washington has set up their own bespoke lithium setup for their overlanding rig. Getting 2nd hand cells, testing them all, throwing them into a purpose built case and away you go. Well, of course there are important differences between the AGM and lithium batteries (AC/DC stuff I’m not fully aware of) and I suspect I will have to make changes to the inverter (but if the current one is already busted…) Feels like a high effort, high risk, high reward possibility…

Given the weird behavior, and the corrosion on the POWER SWITCH (is that the inverter?), I suspect something needs to be sorted on the inverter. Since the generator can still run the appliances but seemingly not charge the battery, I would guess there is a break in the circuit between inverter and house battery. But then how is the fridge pulling volts from the house battery? 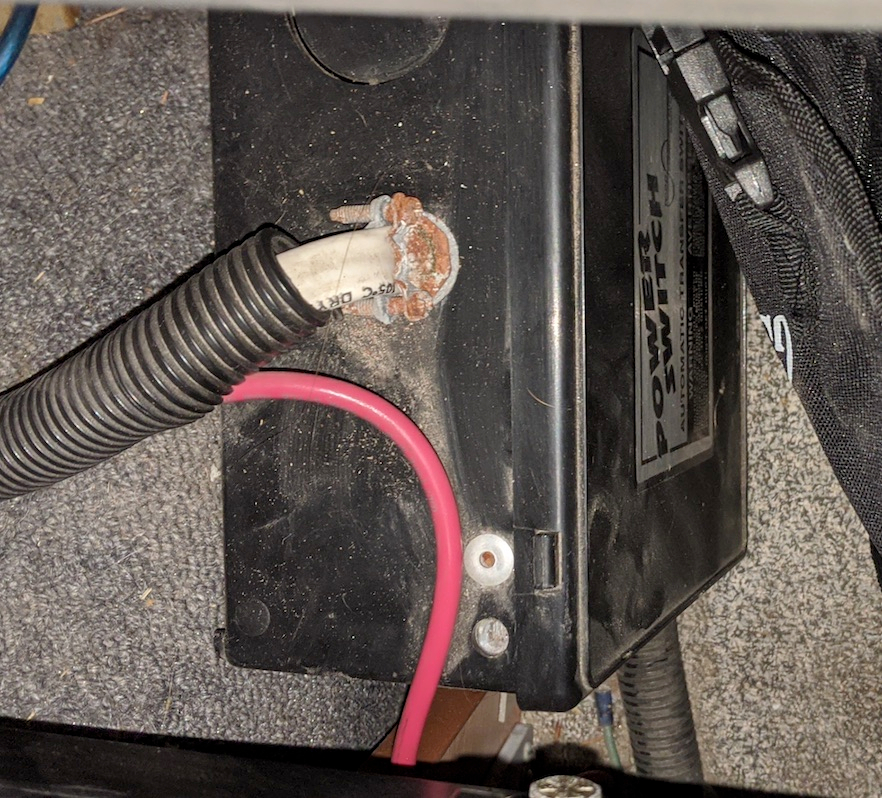 Corrosion on the power switch

So, I’ve been wanting to do this since before there were these power issues. I’m not sure whether I’ll have to update the Kyocera Commander unit as well; the ideal would just be taking off the old panel, mounting the new ones on the roof tracks and plugging in new panel(s). However I have a vague recollection that the control unit can also have a big impact on what power you can get out of panels, so an update might be needed anyway?

That’s basically where I am at today. Air quality is insanely bad outside right now, so I doubt I’m going to get to any of this on the weekend but I would love to hear from folks about what gaps I have in my understanding or plans.

Posted this on the Sportsmobile forum 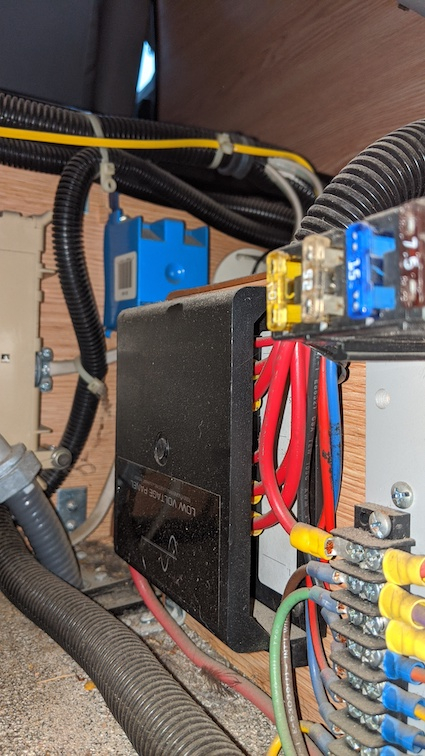 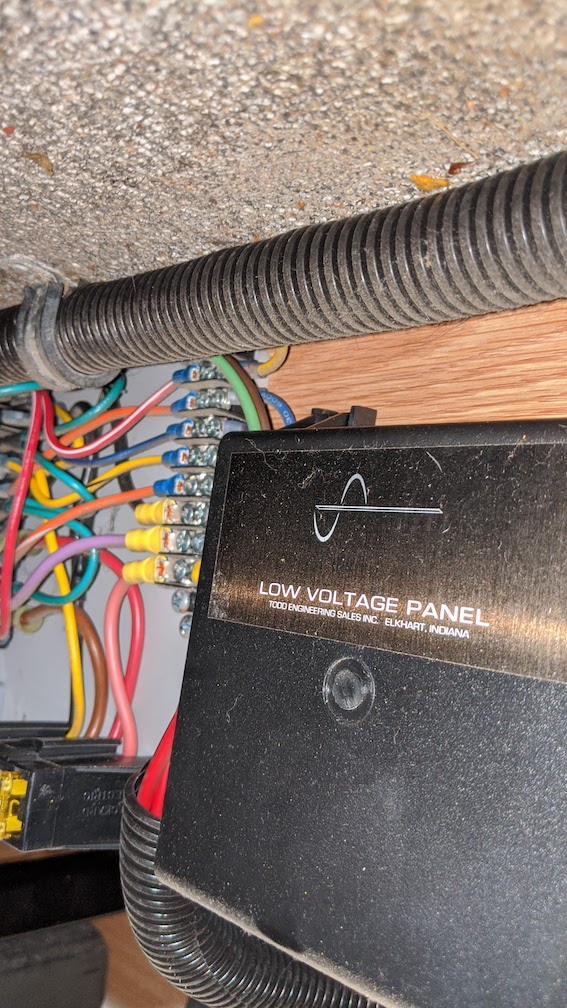 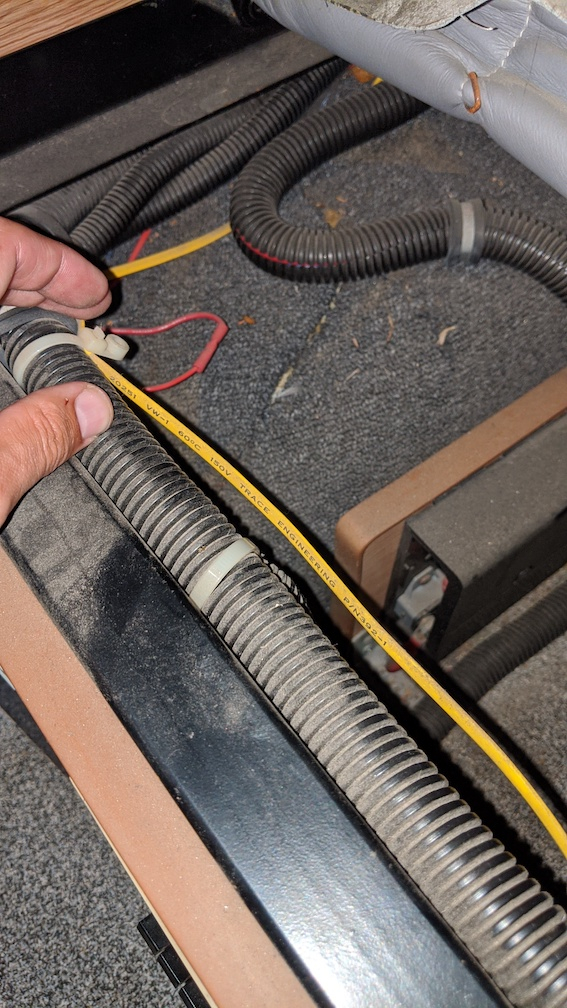 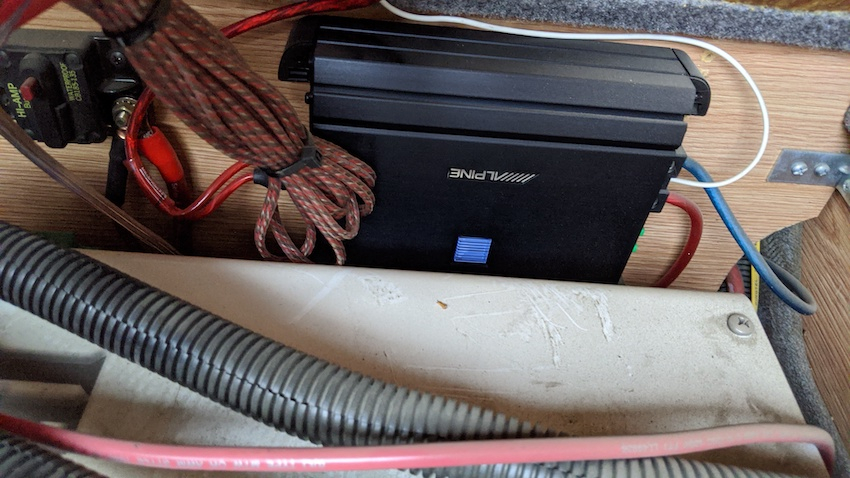 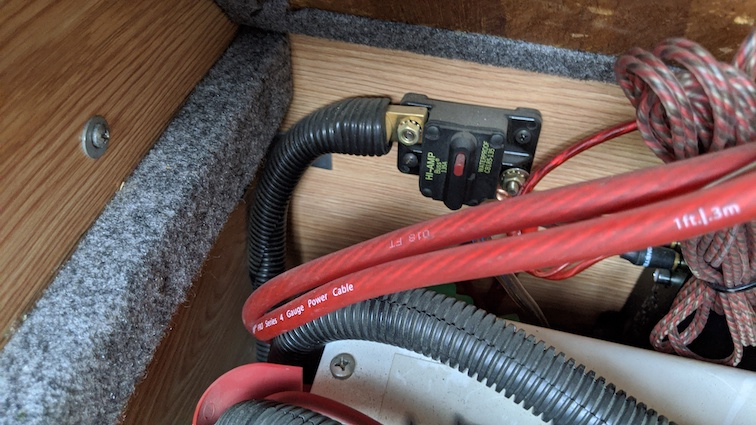 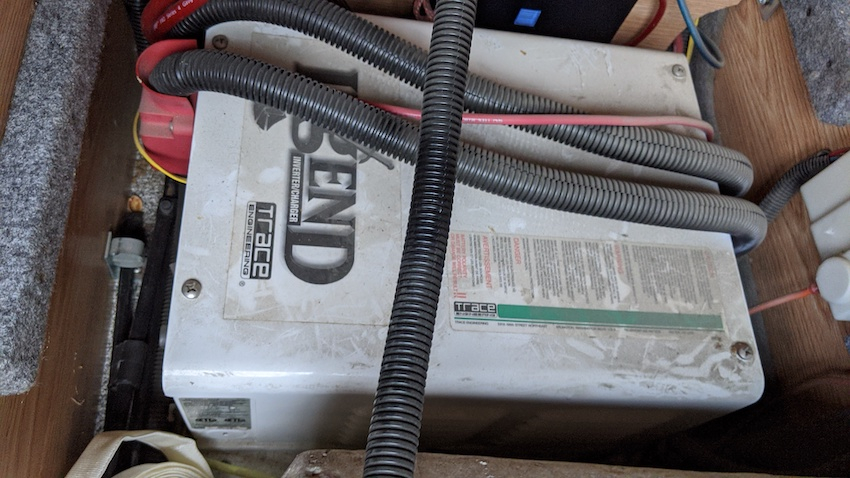